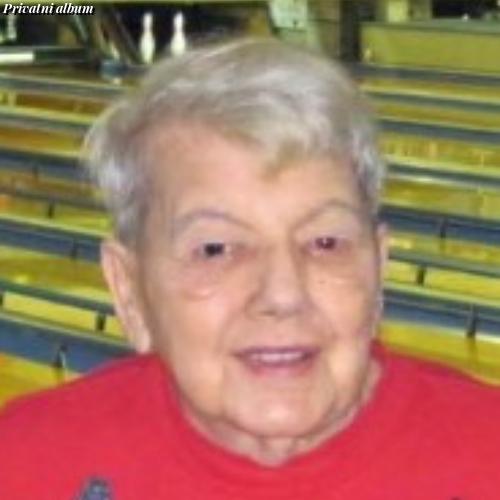 Barbara Watkins (nee Rupcic) was born on May 6, 1925 to parents, Paul and Agnes (Sucevic) Rupcic in McKeesport, Pennsylvania. Her father emigrated from Croatia, and her mother, also of Croatian heritage, was a first-generation American.

Barbara graduated from McKeesport High School where she belonged to both the Math and Latin clubs. Barbara was a member of the Croatian Fraternal Union's McKeesport Lodge. She attended Sacred Heart church in McKeesport where she was a long-time member of the Christian Mothers organization, baking apricot-filled cookies, nut rolls, and apple strudel for their events as well as for family holidays.

Her other Croatian culinary specialties included stuffed cabbage and chicken paprikash. Barbara regularly attended Croatian Day at Kennywood Park, enjoying roasted lamb and Tamburitzan music, often with a trip to Green Gables following the day at the park. Barbara twice visited Croatia, the last trip with her beloved sister, Marge, and her daughter, Patti, in 1994 even while the country was still at war. "It's just a little shrapnel," she assured re: the occasional bombings near the airport! On this trip, they visited relatives in Zagreb and Ogulin, the town from which her father emigrated, also traveling to the towns of Dubrovnik, Rijeka, and Medjugorje - passing through UN checkpoints to enter the latter in Bosnia- Herzegovina where she and her sister made a Catholic pilgrimage to Apparition Hill.

Barbara resided in the Pittsburgh area until 2002 when she moved to Corvallis, to be near her daughter. Barbara worked for Western Pennsylvania National Bank followed by Mellon Bank, rising through the ranks to the position of auditing officer. Even after her retirement in 1985, Barbara worked part-time, traveling to banks across the state to conduct audits.

She also volunteered at Kane Hospital in McKeesport for many years. She was a voracious reader, but her favorite leisure activity was bowling. She bowled in leagues at Playmor bowl in Lincoln Place, Pennsylvania, where she resided for most of her adult life as well as at Highland Bowl after her move to Corvallis. She bowled well into her 80s, and what she lacked in velocity, she made up for with accuracy! She threw a mean curve ball that teetered on the edge of the right gutter before veering left toward the head pin. While strikes were few in her later years, she was quite proficient at picking up those spares!

Barbara was also an avid baseball and football fan. She attended many Pittsburgh Pirate games throughout the years, including the final games (a double-header against the Chicago Cubs) at Forbes Field with her daughter. While many games followed at Three Rivers Stadium, she also attended a game at the new PNC Park before her move to Oregon.

Ever a Pirates fan, in the year before her death, Barbara still bemoaned how Harvey Haddix was not credited with a no-hitter despite pitching 12 perfect innings! Barbara also loved football, reveling in the Steelers' Superbowl wins during the "Glory Years" as well as their two later Superbowl wins, watched with her daughter during her time in Corvallis. While Barbara still rooted for her teams from back east, she grew to be a fan of the Oregon State Beavers, Seattle Mariners, and Seattle Seahawks. However, when the Steelers played the Seahawks in Superbowl XL, there was no question where her loyalties lied as she bled black and gold till the end!

Barbara's children have many fond memories of trips to the Highland Park Zoo, Storybook Forest, Old MacDonald's Farm, the Good Ship Lollipop, and Kennywood and Conneaut Lake Parks. Many summer days were also spent enjoying the neighbors' - the Skelton family - swimming pool which they so generously shared with us. Although Barbara enjoyed outings to the Oregon coast - especially if they involved side trips to Chinook Winds Casino - her most cherished beach memories came from the Outer Banks in North Carolina where the family vacationed nearly every year for two decades beginning in 1965 - and for the last time in 2006. It is Barbara's wish that her ashes be scattered along these shores.

Barbara was preceded in death by her parents as well as siblings, Rosemary Rupcic, Eddie Rupcic, Marge (Rupcic) Miller, Catherine Rupcic, and niece, Kathy Miller. She is survived by her children, Robert Watkins (Barbara Stanley), of Clyde Hill, Washington, and daughter, Patti Lou of Corvallis, as well as her sister-in-law, Gussie Rupcic, along with children, Anna Marie, Paul, Joanne, Denise, and Barbara. She is also survived by her nephews, Tom Miller, and his children, as well as Paul Miller (Joyce Miller), and his children, Andy, Matt, and J.R. Miller (Emily Park), as well as her great,-great nephew James, who she was able to see via the internet during her last year of life. Please visit www.mchenryfuneralhome.com to leave condolence messages for the family