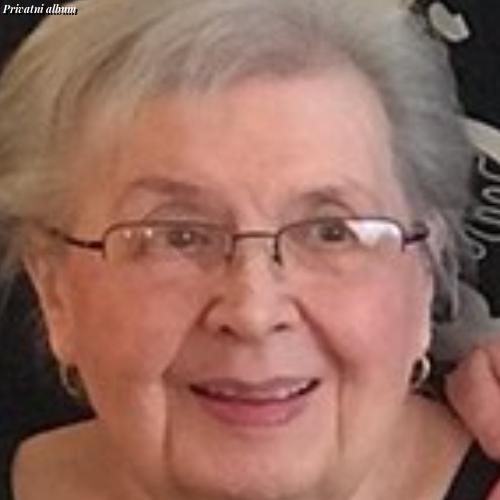 Eva A. Berkes died at her home in DeKalb, IL on Saturday, July 3, 2021 at the age of 92. She passed peacefully surrounded by the love of the family she cherished. In turn, her family is comforted knowing she loved them beyond measure.

Eva was born to George and Katherine (Bolen) Tomovich at St. Mary's Hospital in DeKalb on February 3, 1929. At the age of five, her father passed and she was raised by her young mother who worked hard to give her only child a wonderful life – a life surrounded and supported by an extended and colorful family of close-knit Croatian relatives on North 10th St. in DeKalb. When Eva was 15, her mother married Hugo Olson, her most kind Swedish stepfather.

Eva attended St. Mary's Catholic school and graduated from DeKalb Township High School in 1946. While in high school, she took part in the secret WWII project at the Wurlitizer factory where she sewed patches used on fighter planes. She attended Rockford Beauty School and upon graduating, worked as a beautician. In 1948, she met the love of her life and married Robert G. Berkes on June 4, 1949 at St. Mary's Church in DeKalb. The focus of their incredibly strong 46-year marriage was their family. Their four daughters – and their daughters' husbands and families – were the light of their lives. Eva was a supportive wife and 35-year co-owner of Berkes Kitchens and Baths.
Eva was a faithful Catholic. The Newman Center in DeKalb was the place where she felt the presence of God in others. She was an Ecumenical Minister and served on several committees including the outreach and funeral committees. She chaired and co-chaired several Newman Benefit Dinners.

Eva loved dancing and family gatherings, especially Christmas. She enjoyed her gardens and was very proud of her roses. She was an expert cook who embraced every ethnic cuisine and proudly taught her daughters both simple and difficult Croatian specialties including sarmas and nutbread. She was a 50+ year member of the Croatian Fraternal Union.

As proud as she was of her Croatian roots, so too was she proud of her lifelong home, DeKalb. She worked to preserve DeKalb's culture and heritage by passing on stories and memories, and supporting its arts and culture. She served on the design committee of the NIU Fine Arts Mural in downtown DeKalb. Her image is one of many that can still be seen at the corner of First and Lincoln Highway. Additionally, she was an ardent supporter of events at the Egyptian Theater.

She was preceded in death by her cherished husband who passed away on their anniversary on June 4, 1995; her parents, and stepfather.

Eva is survived by her four daughters, sons-in-law, grandchildren and great grandchildren: Jane and Bill Lawson of Cherry Valley, IL and children Bennett Lawson and Pete Mendoza of Chicago, and Emily and Dustin Anderson and their daughter Audrey of New York, NY; Julia and Greg Sullivan of DeKalb, children Mason Walt of West Columbia, SC, and Alison and Trent Taylor of DeKalb; Joan and Gary Hanson of DeKalb and children Dewanza and Jordan Staley and their son Jackson of Kalamazoo, MI, and Elijah Hanson of DeKalb; and Janet Berkes and Steve Duchrow of DeKalb. Eva's family is forever grateful to La Jean Brown, her caregiver of seven years, who is considered family. Because of LJ, Eva was able to live in her home and her life remained active and full. Special thanks are extended to Dr. Dhaval Thakkar and his nurse Shirley for their compassionate, dedicated care.

Eva's Memorial Mass will be celebrated by Monsignor Steve Knox at Christ the Teacher University Parish, Newman Center, 512 Normal Rd, DeKalb, IL at 3PM Friday, July 9, 2021. Friends may greet the family beginning at 2PM. Burial will be private at St. Mary's Cemetery in DeKalb. In lieu of flowers, memorials may be made to St. Jude Children's Research Hospital, a cause dear to Eva's heart. Arrangements were entrusted to: Finch Funeral Home 310 Oak St. DeKalb, IL, 60115 (815) 758-3841.